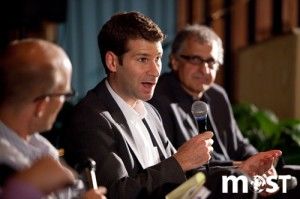 Audience viewed clips of actual Drone strikes in Iraq, as well as footage from 24, Generation Kill and THQ’s recent videogame, Homefront. John Horn led an in depth discussion on the technology utilized in both storytelling and war, as well as the complexities of “the other” and blurred lines of conflict, which are increasingly more often, challenging Writers.

Images from the Event

Hollywood Iftar 2017 (hosted by MOST and Writers Guild of America Foundation – June 14, 2017) MOST and the Writers Guild Foundation co-hosted the first Hollywood iftar (which is the meal that … END_OF_DOCUMENT_TOKEN_TO_BE_REPLACED

The Television Critics Association (TCA) held its annual conference In July 2014, at the Beverly Hilton Hotel in Los Angeles. MOST was invited by TCA and the FX Network to take part in a panel before … END_OF_DOCUMENT_TOKEN_TO_BE_REPLACED

The first MOST event in partnership with the Writer's Guild of America, East featured a panel with "Daily Show" writers Kevin Bleyer and Zhubin Parang, Glenn Eichler of "Colbert Report," and Kambiz … END_OF_DOCUMENT_TOKEN_TO_BE_REPLACED